The mitigation measures enacted as part of the response to the unfolding SARS-CoV-2 pandemic are unprecedented in their breadth and societal burden. A major challenge in this situation is to quantitatively assess the impact of non-pharmaceutical interventions like mobility restrictions and social distancing, to better understand the ensuing reduction of mobility flows, individual mobility changes, and impact on contact patterns. Here we report preliminary results on tackling the above challenges by using de-identified, large-scale data from a location intelligence company, Cuebiq, that has instrumented smartphone apps with high-accuracy location-data collection software. We focus this initial analysis on Italy, where the COVID-19 epidemic has already triggered an unprecedented and escalating series of restrictions on travel and individual mobility of citizens.

We selected a panel of users who were active during the first week of the outbreak (February 22-28, 2020). This leads to a sample of about 170k users with a total of about 175 million data points over the 8 weeks of study.

The COVID-19 outbreak was declared by the WHO a Public Health Emergency of International Concern on 30 January 2020 and since then, it has infected more than 125,000 cases in 114 countries, reaching pandemic proportions.

Following the first local sustained transmission in Italy, the national government put in place an increasing number of policies aimed at containing the local outbreaks and subsequently to mitigate the sustained transmission and delay the epidemic peak. The policies introduced between the end of February and the first week of March 2020 ranged from school closure, advise against traveling or even ban any non-authorized displacement towards and from areas with sustained local transmission, suspension of school trips and public events, closure of museums, increasing restrictions for the opening hours of restaurants and bars and enforcing of smart/remote working among others.

Almost every day from February 25th to March 9th novel and stricter policies were declared in an increasing number of Italian provinces. In the following a brief timeline of the main facts and policies implemented are reported:

We are able to assess in near real-time the effects of public health policies on the mobility patterns and social mixing in Italy, by measuring:

We estimate the effects of the interventions during the first three weeks since the start of the outbreak (February 18, 2020):

To do so we average different mobility and proximity metrics during the pre-outbreak period (between January 18 and February 19, 2020) and observe their weekly and daily evolution, in real-time, as the intervention policies are enforced.

Our key results can be summarized as follows:

Our results represent a preliminary assessment of the efficacy of mitigation policies in reducing mobility and social mixing aimed at slowing the COVID-19 epidemic in Italy and can be helpful to modelers and policymakers.

In the week of February 22-28, we observe a marked reduction of mobility between Italian provinces especially in the area initially affected by the outbreak. The flows of users traveling out of the provinces of Lombardy, Piedmont, Emilia Romagna, and Veneto, decreased by an average of 20% as shown in the Figure below. For the provinces most affected by the outbreak (Lodi, Cremona), the traffic reduction was about 30%. 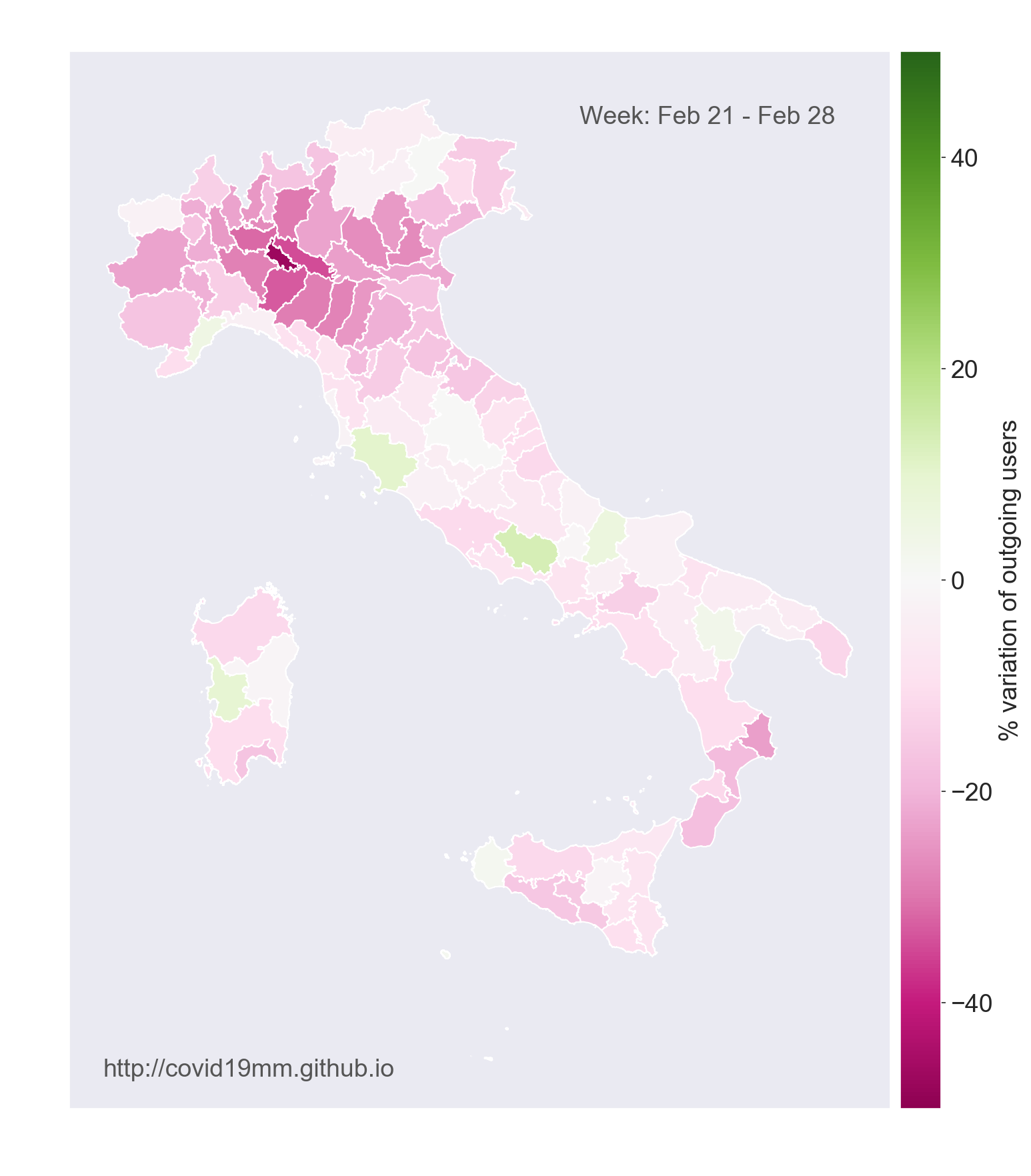 In the week of February 29 - March 6, the mobility between provinces decreased further, especially in the provinces of Lombardy and Emilia Romagna, with reductions up to 30% in Lodi, Cremona, Parma, Piacenza, and Bologna. 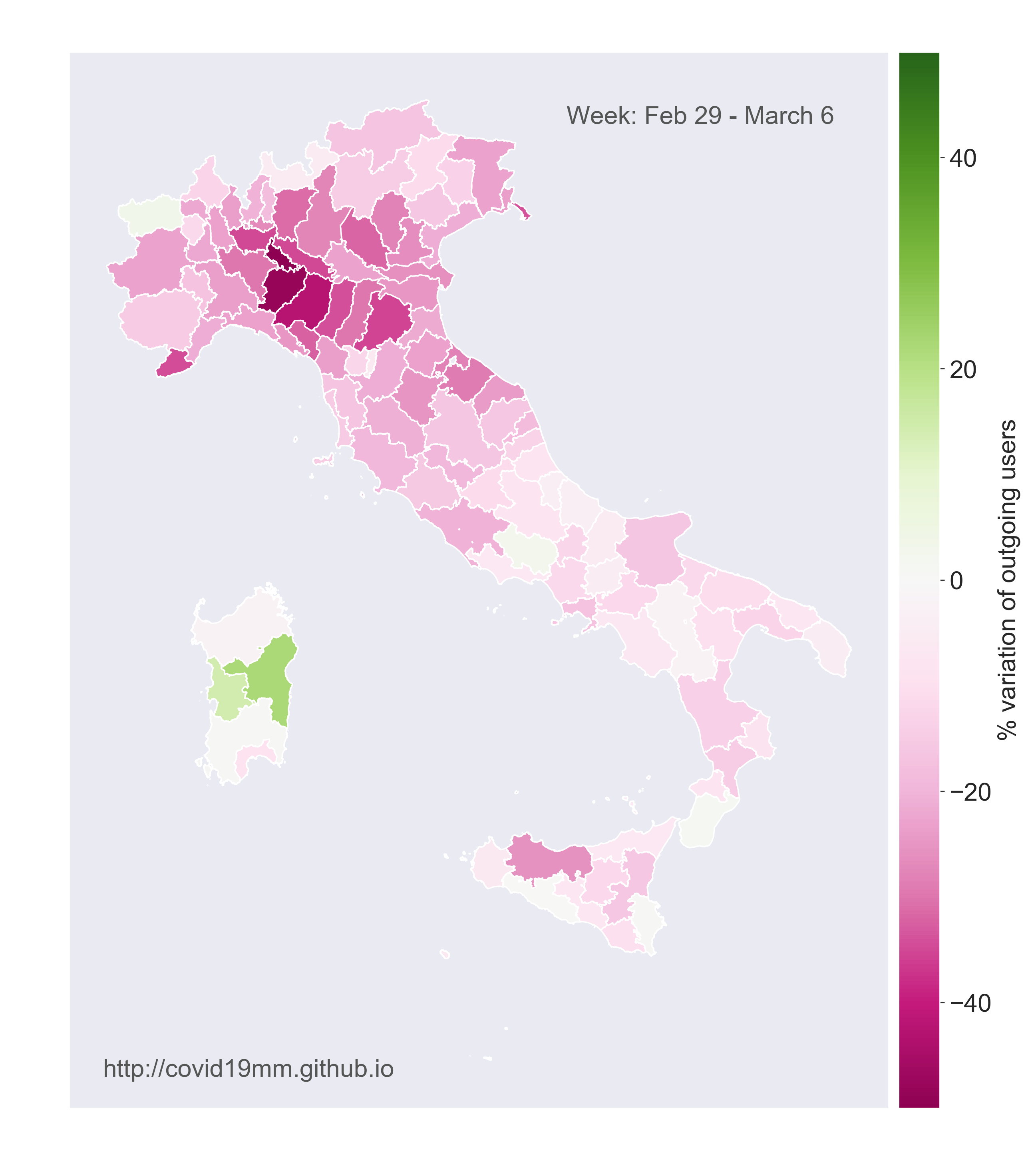 In the week of March 7-10, following the national lockdown, we observe a 50% reduction in the movements across all Italian provinces, as shown in the map below. 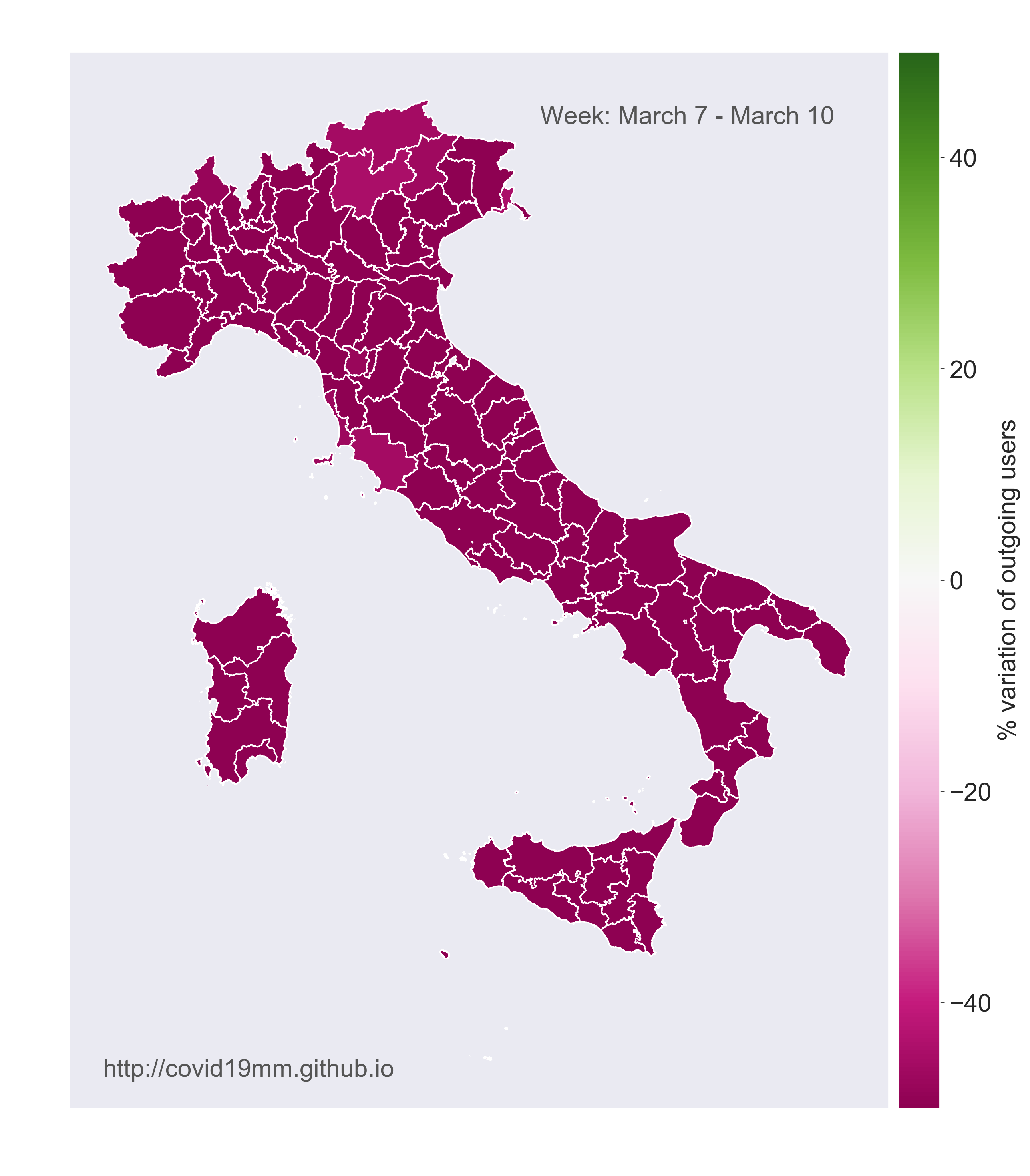 Besides the aggregated traffic of people moving from/to individual provinces, it is also possible to extract more granular network information about the fluxes of individuals traveling between pairs of provinces. Thus, weekly and daily province-to-province weighted mobility networks have been extracted. Averaging the fraction of travelers with respect to the weekly user-base on every link in the 5-weeks period before the outbreak, a baseline value has been estimated. As shown in the figure below, we observed a drop up to 40% on links connecting Lodi (where the first Italian cluster was detected), while on week 3 several connections both from Northern and Center Italy observed a drop of 50% up to 70% of their traffic. 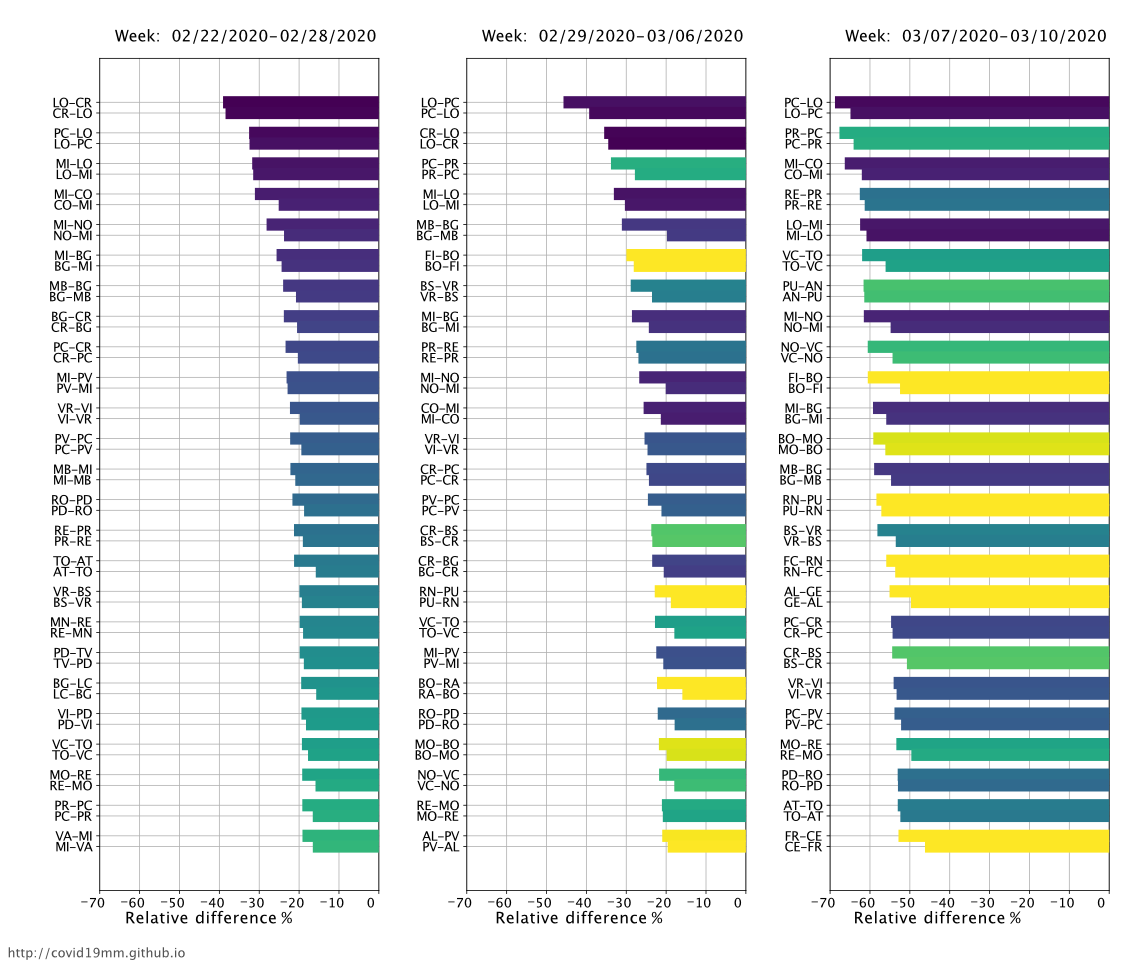 Beyond mobility restrictions, other public health interventions such as the ban on public events and gatherings, school closures, etc. have the goal of reducing the number of contacts among individuals in the population.

We evaluated the effect of such interventions by defining a proxy of the potential encounters each user could have in one hour. To this aim, we built a proximity network among users based on the locations they visited and the hour of the day where these visits occurred. To create such a network, we assert proximity between any two users of the same province who were seen within a circle of radius R = 50m over a 1 hour period.

As shown in the figure below, the average degree of the users’ proximity network has decreased significantly in almost all provinces of Italy, in the week of the national lockdown (Provinces with less than 500 users are shown in grey). In some provinces (Milano, Piacenza, Rimini, and others), the average network degree has dropped about 30% with respect to the pre-outbreak period. 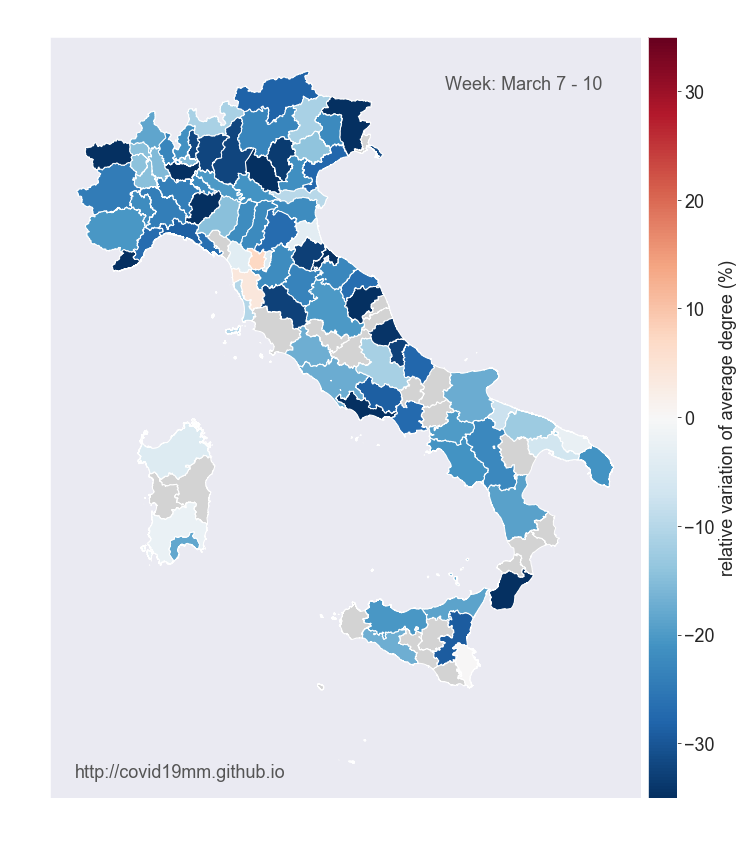 Heterogeneity in individual mobility can be captured by different mobility metrics. Here, to estimate the characteristic distance traveled by users before and after the outbreak, we computed the radius of gyration of the same population during the weeks before the restrictions and the 3 following weeks. Before the COVID-19 outbreak, half of the population was traveling more than 5.7 km a week while on the third week of restrictions, half of the population travel less than 2 km a week. After identifying the province of residence of the users (the province of residence is defined as the province in which the majority of data points of the user was recorded during the night), we computed the median radius of gyration of the population in each province.

While the largest drops in the radius of gyration are mainly observed in the North during the first 2 weeks of restrictions, we observe a more homogeneous drop all over the country, after the national lockdown. 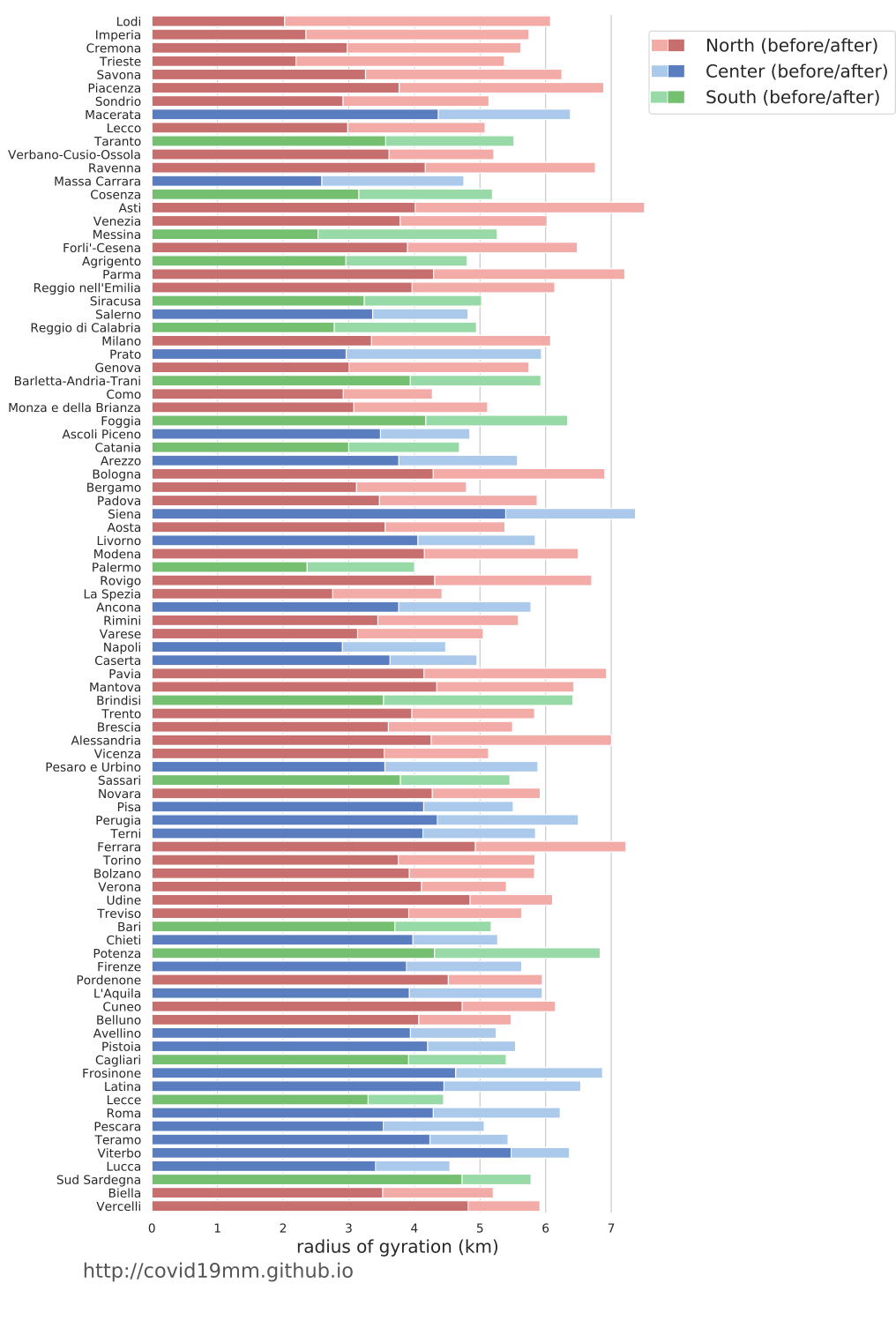 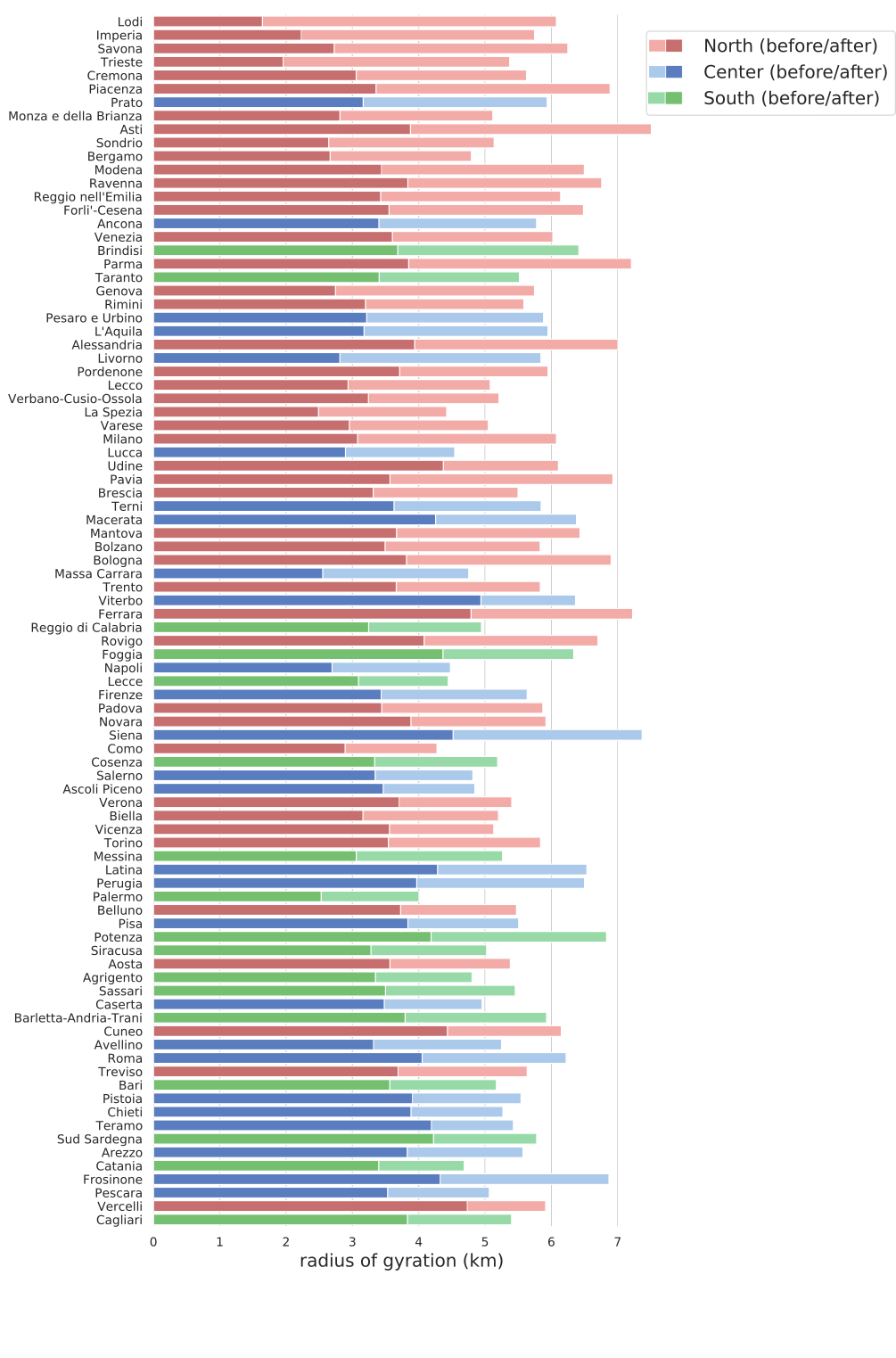 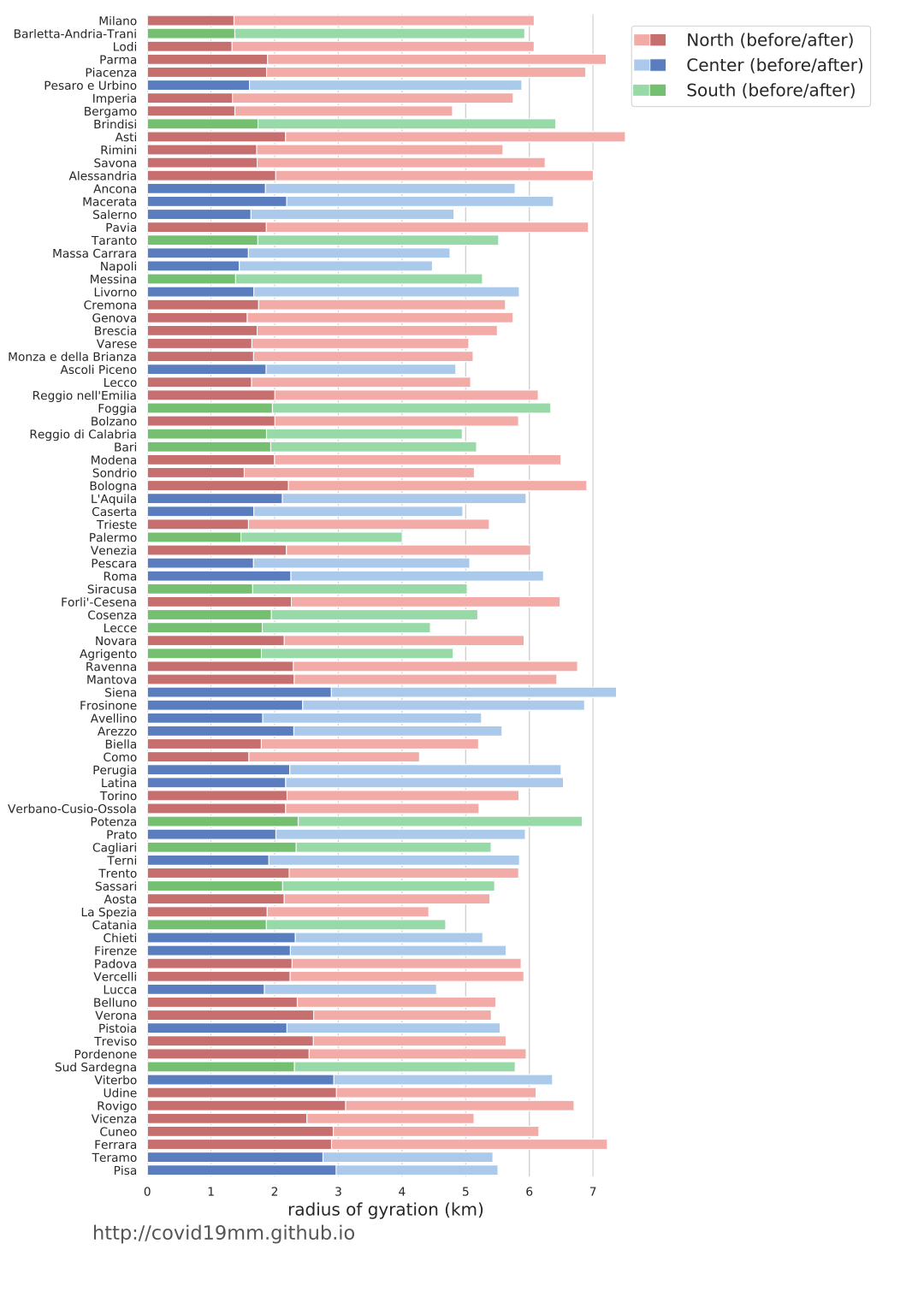 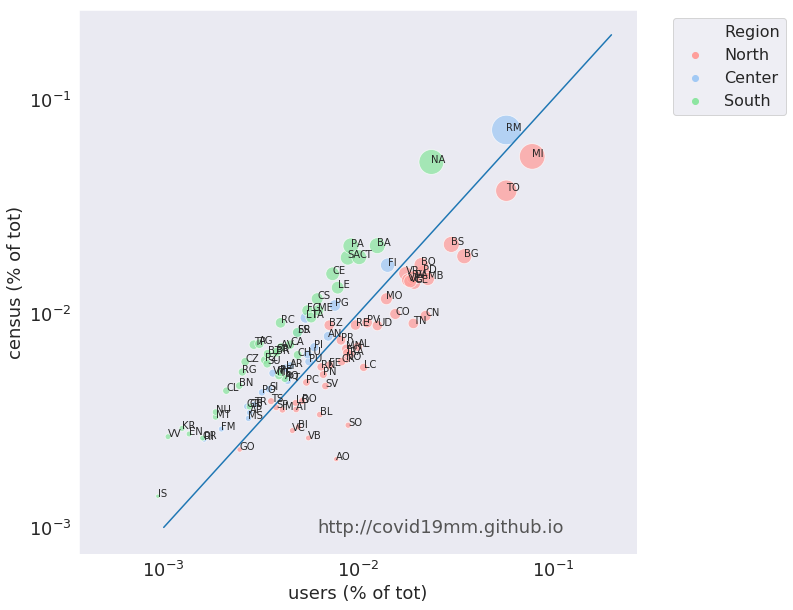